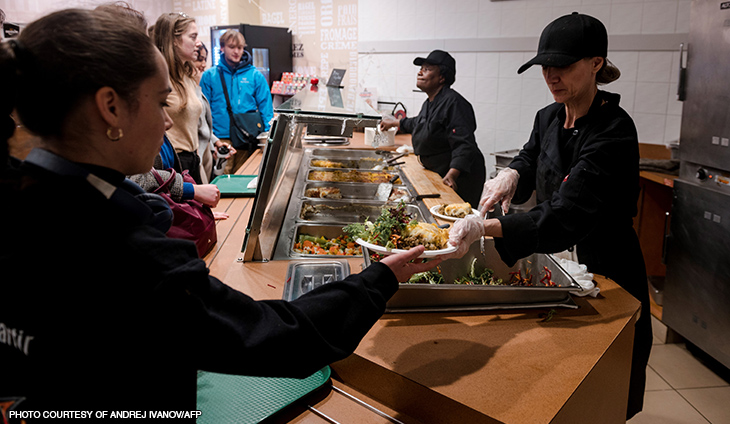 “I’m surprised to see that a dish with meat is better than a vegetarian dish,” comments Elizabeth Labonte, a chemical engineering student, referring to their environmental impact.

Every Thursday, three hot meal options receive a grade from A to F which corresponds “to a range of equivalent CO2 emissions in kilograms,” explains Patrick Cigana of the school’s Office of Sustainable Development.

Supported by the student body, the project aims to educate and raise awareness, says Cigana.

“It can help students know what is best for the environment,” confirms Marie Lourioux, a 22-year-old student who also suggests reducing the price of the least-polluting dishes.

“For there to be a real change in our viewpoints, we really have to become aware of this parameter,” adds Daniel Fernandez. He is a master’s student who is about to dig into his lunch of meat and potatoes, rated B compared to the D+ given to the vegetable focaccia because of its au gratin cheese.

– From farm to plate –
In order to calculate the carbon footprint of each dish, the engineering school had each recipe analysed by the on-campus International Reference Center for Life Cycle Analysis and Sustainable Transition (CIRAIG).

A small team of researchers and students were able to calculate the carbon footprint of each ingredient based on previously compiled data bases.

“It really starts from the field, from the moment we cultivate the plant, until the dish is served in the cafeteria”, explains Francois Saunier, deputy general manager of the research center.

Pointing to diagrams on his computer, he specifies that these calculations include all transport but also food waste as well as cooking in the cafeteria.

“There are certain results that lead the consumer to ask questions, and that breaks down preconceived ideas,” adds the researcher, noting the unexpectedly high carbon footprint of cheese or rice, for example. Both are a major source of methane emissions, he says.

– Top CO2 emissions source –
Often misunderstood, the food system — including production, packaging and distribution — represents the “primary source of greenhouse gas emissions at the global level,” according to Carole-Anne Lapierre, an agriculture and food systems analyst at Equiterre.

Polytechnique’s initiative “gives us immense power as consumers, because we can make different choices,” adds the expert, who nevertheless recognizes the difficulty of completely changing one’s diet and so recommends doing it “in the form of challenges,” step by step.

Although the Quebec university’s pilot project is unique in Canada, similar concepts were developed for menus of certain British restaurants and at a French university in 2019.

But for some, their choices are dictated primarily “by price above all else,” especially during the current period of soaring inflation, says Chelbali Ryad, 24, after a stop at the checkout counter to pay for his meal.

For the university’s Cigana, the most important thing is to raise awareness, saying “all that people learn through this program, they can apply it at home too”. (AFP)