Major dates for sterling after 1985 dollar-low 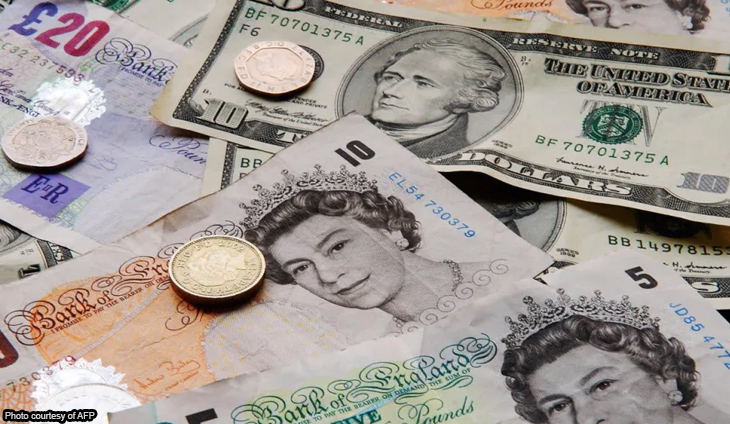 The pound on Wednesday dropped to $1.1406, its lowest level since 1985, on UK recession fears as Russia’s invasion of Ukraine fuels global inflation.

Here is a chronology of key events in the history of Britain’s Brexit-hit currency.

1976: Pound crisis
Following the oil shock of 1973 that sent crude prices and wider inflation soaring, the UK won a bailout from the International Monetary Fund that sent the pound plunging to $1.6.

A period of austerity demanded by the IMF, applied even more vigorously from 1979 when Margaret Thatcher became prime minister, saw sterling hit $2.4460 in 1980.

1985: Record low and Plaza agreement
The pound resumes its slide as the greenback wins support from its reserve currency status, with sterling tanking to an all-time low at $1.0520.

Major powers then agree to voluntarily depreciate the dollar in the Plaza agreement.

Britain, France, Germany, Japan and the United States seal the deal at the New York Plaza hotel, ending the strong dollar era which brought US industry to its knees.

However, Britain is forced to pull sterling out of the ERM in September 1992 as investors like George Soros bet heavily against the currency.

“Black Wednesday” sparks a markets earthquake, sending the pound crashing from $2 in September to less than $1.5 by the end of the year.

2007: Slide under $2 on financial crisis
The pound recovers as the global economy sees its longest period of growth following the Second World War.

Sterling hits $2.1 in 2007 but falls under $2 a year later as the global financial crisis takes hold.

In October, it tumbles to $1.2, the result of a “flash crash”, said to have been caused by high-frequency trading propelled by algorithms or possibly just human error.

The pound meanwhile continues to suffer also from troubled post-Brexit trade negotiations between London and Brussels.

The currency then tanks to a fresh 37-year nadir against the greenback in September 2022, propelled by worries of a prolonged economic downturn as inflation rockets.