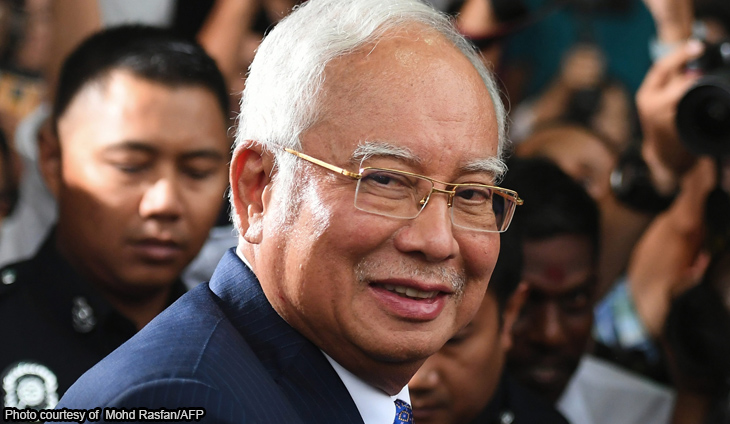 Najib’s daughter-in-law Nur Sharmila Shaheen said the family was told he was sent to Kajang Prison, located south of the capital Kuala Lumpur.

“My father-in-law asked us to take care of the family. He remained strong and calm,” she said.

Federal Court chief justice Maimun Tuan Mat, speaking on behalf of a five-judge panel, said the tribunal found Najib’s “complaints as contained in the petition of appeal devoid of any merit”.

“On the totality of the evidence, we find the conviction of the appellant on all seven charges safe. We also find that the sentence imposed is not manifestly excessive,” she added.

The appeals are “unanimously dismissed and the conviction and sentence are affirmed”, Maimun said.

The 69-year-old former prime minister looked somber and dejected, seated by his wife Rosmah and two children as the verdict was read.

Journalists who were in an adjacent room watching the proceedings through video link saw Najib surrounded by family members, friends and party mates before the connection was cut off.

Outside the court, teary-eyed family members and supporters hugged each other.

Earlier in the day when Najib arrived in court, around 300 supporters mobbed his car chanting “bossku” — “my boss” in Malay — a rallying cry among his defenders.

Just before the verdict was read, Najib, who had said he received an unfair trial, made an impassioned plea asking for a two-month adjournment so he can adequately prepare for a defence.

During a break in the proceedings, he spoke to supporters, telling them “if I am guilty, please forgive me”.

– Barred from elections –
Najib is the UK-educated son of one of Malaysia’s founding fathers who had been groomed for the prime minister’s post from a young age.

The final ruling on the jail sentence also came four years after his long-ruling party’s shock election defeat in 2018, during which allegations he and his friends embezzled billions of dollars from state fund 1MDB were key campaign issues.

A lower court in July 2020 found Najib guilty of abuse of power, money laundering and criminal breach of trust over the transfer of 42 million ringgit ($10 million) from SRC International, a former unit of state fund 1MDB, to his personal bank account.

An appellate court in December denied his appeal, prompting him to go to the Federal Court for a final recourse.

Some analysts said the decision will likely derail any plans by Najib for a political comeback.

“Under Malaysian law, Najib cannot stand for this election and the next election (if found guilty),” James Chin, a professor of Asian studies at the University of Tasmania, told AFP before the verdict was announced.

“Obviously, his political career is gone.”

There has been speculation that polls may be held this year, though elections are not due until September 2023.

But Oh Ei Sun, principal adviser for think-tank Pacific Research Center of Malaysia, said one way out for Najib is to get the king’s pardon.

“He could still apply for clemency (from the king),” he told AFP. “And if pardoned, as many expect, he could easily mount a comeback as his feudalistically minded supporters are numerous in number.”

Oh said, however, that the current Prime Minister Ismail Sabri Yaakob — who belongs to the same United Malays National Organisation party — must recommend a pardon.

Najib and his ruling party were voted out in 2018 following allegations of their involvement in a multibillion-dollar financial scandal at 1MDB.

He and his associates were accused of stealing billions of dollars from the country’s investment vehicle and spending it on everything from high-end real estate to pricey art. (AFP)