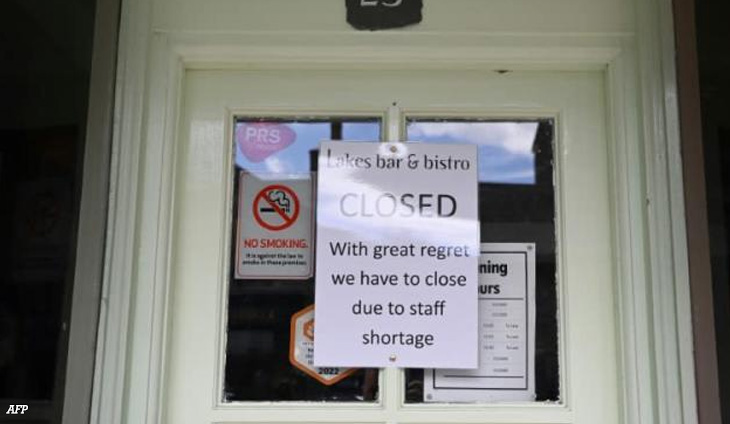 Job vacancies seem to come ten-a-penny in Keswick, a tourist town in England’s picturesque Lake District, as the hospitality sector cries out for staff — shortages which are a direct result, critics say, of the coronavirus pandemic and of Brexit.

“Hiring. No experience needed,” says another in a fish-and-chip shop.

Britain’s ruling Conservative party claims to have engineered a “jobs miracle” since coming to power in 2010, with the national unemployment rate currently standing at 3.8 percent, the lowest level in almost 50 years.

That is, in fact, better than the International Labour Organization’s definition of “full employment” — a jobless rate of five percent.

But for Tony Wilson, director of the Institute for Employment Studies, while the current situation in Britain may be “the best context in 20 years for workers”, it is not good for the economy as a whole.

The shortage of workers may be “leading to pay growth and some improvements in employment terms, but it doesn’t help the economy at all,” he said.

If companies are unable to fulfil their potential then profits and overall growth take a hit, he argued.

Indeed, Britain is set to have the lowest economic growth of any Group of Seven country, projections show.

Back in Keswick, Alison Lamont, the 60-year-old co-owner of the Relish cafe, does not have a minute to spare as she juggles serving with taking payments.

Since Covid lockdowns were lifted, the small eatery has switched to takeaway services only.

There is simply no “time for clearing the tables”, says Lamont.

Despite attempts to recruit via social media or simply by word-of-mouth, she cannot find the extra staff needed to run the cafe properly.

Young people “all want to be influencers or work from home”, Lamont complains.

“The main impact on family life is that we don’t get weekends together and no time away, we have to work and work and work,” she tells AFP, as her husband, who prepares the food upstairs, runs down to bring a sandwich.

Lamont, welcoming each customer like an old friend, says she bought the cafe with her husband around a year before Covid struck.

She struggles to sleep some nights and sees no end to the current situation.

“You can only do this for so long,” Lamont says.

Further up the street, the restaurant at George Hotel was forced to shut for three-and-a-half months this year because it had no chef, costing the business £30,000 ($35,000) a week, a situation that is seen again and again across the UK.

The owner of a London beauty salon told AFP she had even resorted to using a headhunter, typically used for recruiting senior management positions, to find a beautician — with no luck so far.

In other sectors, airlines such as British Airways and EasyJet are struggling to re-hire the staff they laid off in their thousands at the start of the pandemic.

The result: mass flight cancellations and a situation that is only set to become worse during the upcoming summer holiday season.

The reasons for Britain’s current labour market woes are widely blamed on the country’s decision to quit the European Union and on the economic fallout from the coronavirus pandemic.

“Since the economy reopened… the demand for workers is much higher than the job seekers, especially in low-paid, low-skill sectors” such as cleaning, construction, distribution and warehousing, said Jack Kennedy, UK economist at recruitment group Indeed.

The fallout from Covid has caused almost half-a-million UK workers to leave the labour market, the expert said.

While employment rates in both France and Germany are currently “higher than before the pandemic,” in the UK and US “it is still below pre-pandemic levels,” said Wilson at IES.

“I don’t think it has ever been so difficult,” says Derek Wilkinson, managing director of vegetable grower Sandfields Farms in central England.

Prior to Brexit, Britain’s agricultural and construction sectors had relied heavily on workers from central and eastern Europe, many of whom have since returned home.

Wilkinson, 55, points out that seasonal labourers must now apply for a special visa, which can take seven weeks to come through.

According to Indeed economist Kennedy, there is a total shortfall of around 200,000-300,000 European workers, including many Ukrainians who have stayed home to fight in the war against Russia.

With other eastern Europeans going back to home countries that have recently become more prosperous — and Britons themselves showing little inclination to take on such back-breaking work — many employers are having to look further afield for seasonal staff, from the Philippines, South Africa and Uzbekistan.

Wilkinson said that with a shortfall of 120 staff in May, Sandfields Farms would have to let 40,000 kilos of asparagus and 750,000 bunches of spring onions go to waste.

And coupled with Britain’s cost-of-living crisis, that means his annual profits this year will be halved.

In order to woo workers, companies are having to offer better pay and conditions.

Wilkinson has renovated 400 mobile homes for seasonal workers, and a restaurant owner in Keswick has purchased a building to house their staff.

Other firms are offering different kinds of perks.

Accountancy giant PricewaterhouseCoopers, for example, allows employees to finish work early on Fridays. But some smaller companies are offering massage and aromatherapy treatments to staff, while dozens of other firms are trialling four-day weeks.

All this comes at a time when many Britons are re-thinking their careers completely.

With many workers on precarious contracts, one million people switched jobs in the last quarter, seeking better pay and a better life.

Before becoming pregnant, Lorna Roberts, 26, worked in hospitality. But with the arrival of her baby and the stresses of restaurant work, she moved to retail.

“It started to become more difficult after lockdown,” says Roberts, who now sells outdoor gear for Alpkit in Keswick.

“A lot of people were rude, we were short-staffed constantly,” she says, describing how former colleagues suffered panic attacks and breakdowns.

Her new, less stressful job also fits in better with her interest in nature. And Roberts says her hourly wage has also increased.

“I saw an ad outside and I just thought to pop in and ask,” she says, highlighting the ease with which people are able to switch jobs in the current climate. — Agence France-Presse