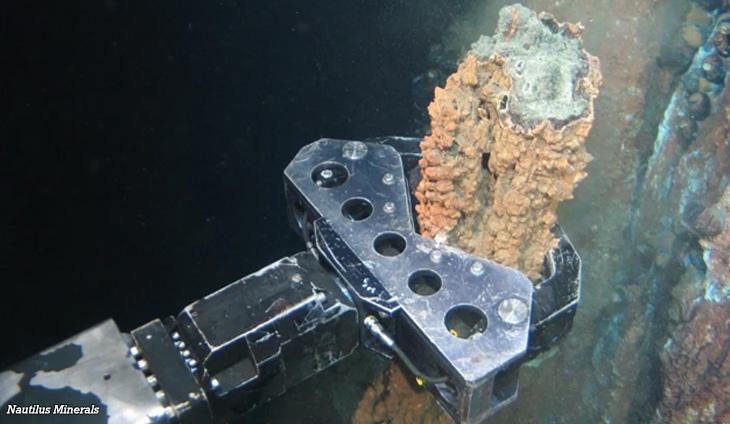 A handful of postage-stamp nations in the South Pacific launched an uphill battle this week against the deep-sea mining of unattached, fist-sized rocks rich in rare Earth metals.

The stakes are potentially enormous.

But the extraction process would disfigure what may be the most pristine ecosystem on the planet and could take millennia, if not longer, for nature to repair.

The deep-sea jewels in question, called polymetallic nodules, grow with the help of microbes over millions of years around a kernel of organic matter, such as a shark’s tooth or the ear-bone of a whale.

“I look at them as miracles.”

An incipient deep-sea mining industry also sees them as miraculous, though for different reasons.

“High grades of four metals in a single rock means that four times less ore needs to be processed to obtain the same amount of metal,” notes The Metals Company, which has formed exploratory partnerships with three South Pacific nations — Nauru, Kiribati and Tonga — in the mineral-rich Clarion-Clipperton fracture zone.

Nodules also have low levels of heavy elements, which means less toxic waste compared to land-based extraction, according to the company.

Commercial mining has not started anywhere in the world, but about 20 research institutes or companies hold exploration contracts with the International Seabed Authority (ISA) in the Indian, Pacific and Atlantic oceans.

“Deep-sea mining compromises the integrity of our ocean habitat and should be discouraged to the greatest extent possible,” Whipps said, calling for an open-ended moratorium.

Likeminded neighbouring nation states Samoa, Tuvalu and the Solomon Islands have backed the call, along with more than 100 mostly green party legislators from three dozen nations across the world.

A similar motion put to a vote last September before the International Union for the Conservation of Nature (IUCN) — an umbrella organisation of 1,400 research institutes, environmental NGOs and indigenous groups — passed easily.

“Mining, wherever it occurs, is well known to have environmental costs,” said Earle, the scientist.

“On the land at least we can monitor, see and fix problems, and minimise the damage. Six thousand metres (20,000 feet) beneath the surface, who’s watching?”

But in Lisbon, explicit support from other countries for a temporary ban on ocean-floor mining on the high seas, outside of national territorial waters known as exclusive economic zones (EEZs), was scarce.

Chile stepped up, calling for a 15-year pause to allow for more research.

The United States, along with other developed nations, took a more ambiguous stance, calling for scientific evaluation of environmental impacts but not closing the door to future mining.

“We haven’t taken an official position on it,” US climate envoy John Kerry told AFP in an interview.

“But we have expressed deep concerns about adequately researching the impacts of any deep-sea mining, and we have not approved any.”

To the surprise of many in Lisbon, France’s President Emmanuel Macron appeared to endorse a halt to deep-sea mining on the seas, despite the fact that France holds mining exploration licenses from ISA, the intergovernmental body overseeing exploitation of the ocean floor.

“I think we have, indeed, to create the legal framework to stop the high-sea mining and not to allow new activities putting in danger these ecosystems,” Macron said at a side event.

“We have to promote our scientists and explorers to better know and discover these high seas.”

Deep-sea mining opponents were thrilled with the statement, but are waiting to see what follows.

“Is the French government going to put in the diplomatic effort in order to make what he said they’ll do actually happen? We’ll see,” said Matthew Gianni, co-founder of Deep Sea Conservation Coalition.

The clock is ticking because last year Nauru, in cooperation with The Metals Company, triggered a rule requiring the ISA to finalise regulations for high-seas mining worldwide within two years.

Sources say they are likely to try to push through draft regulations which, if adopted, could see mining operations licenced by this time next year. — Agence France-Presse

Trending: Money
Trending: Bilyonaryo
Back to Homepage
PrevPreviousKylie Tinga always thinks of others first before herself
NextIndia bans many single-use plastics to tackle wasteNext