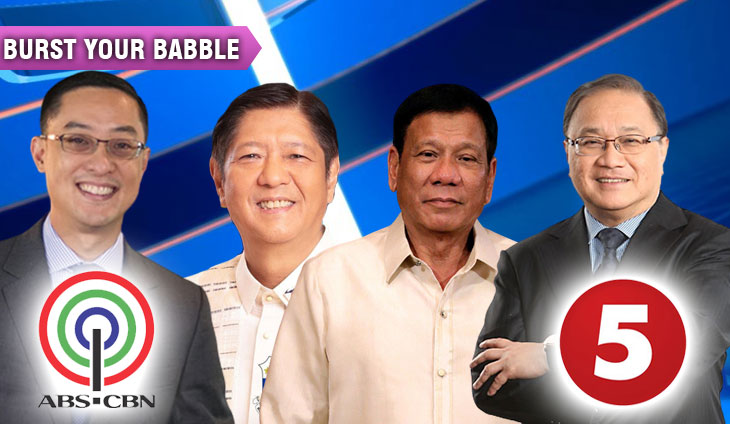 Bilyonaryo Manny V. Pangilinan and the Lopez family are poised to launch their long-rumored media collaboration as soon as President Rodrigo Duterte steps down from office on June 30.

But while the planned marriage of TV5 and ABS-CBN would create a potent threat to GMA Network’s dominance, it would also create an unlawful monopoly in satellite/cable TV from the inevitable merger of Cignal and Sky Cable.

A Babbler said the Pangilinan-led Mediaquest (which owns TV5 and Cignal) and ABS-CBN (which has been reduced to a mere content provider after Duterte killed its franchise in 2020) are on the final leg of negotiations to combine their resources into one giant media company.

“They are still discussing who between MVP or the Lopezes will take the lead, but everything’s all set. It’s a win-win arrangement – TV5 gets the creative power it has been lacking for years while ABS-CBN gets back on free TV after being off the air for two years,” the Babbler said.

“Both MVP and (ABS-CBN president) Carlo Katigbak have both discussed separately their plans with BBM (President-elect Bongbong Marcos),” the Babbler added.

The new deal will expand ABS-CBN’s presence and influence on TV5 but not as a block timer (just like their current set-up) but as a co-producer of its shows. “There is a general agreement on entertainment programs, the news is a sticking point. Will TV Patrol replace TV5’s Frontline? Let’s wait and see how they handle that,” the Babbler said.

Some groups want TV5 to retain Frontline but there are also some who are pushing for TV Patrol to be TV5’s flagship news program while moving Frontline to its other channel One PH.

The Babbler said the two camps are set to launch on July 1 (Duterte’s term ends on June 30) a new station ID for TV5 where its talents will be featured alongside ABS-CBN’s stars.

TV5 has already dropped ABS-CBN’s “Kapamilya” in its teaser for the new station ID with former ABS-CBN talents like Korina Sanchez making the not so subtle pitch.

Aside from content, a major sticking point in the last-minute discussions is how to get the Philippine Competition Commission to agree to the TV5-ABS-CBN collab if it would lead to a Cignal-Sky Cable monopoly.

Cignal is currently the biggest pay TV provider in the country with four million subscribers nationwide while Sky Cable is the leading cable TV in the country. A merger would trigger opposition from rivals.

“It’s possible ABS-CBN might drop or give up the Sky Cable franchise just to get the deal going. But nothing is cast in stone yet,” Babbler said.